Congratulations to the Fighting Irish Ladies team as they came in 2nd place out of 53 teams. The key to their success once again was the tightness of the group. All 5 runners were separated by only 31 seconds. Once again, it was Nina Zraik, Leah Lisle, Isabella Ceepo, Elaina Mendiola and Mia Brady leading the way. Also, Maddie Mellinger and Natalie Tobin had great performances for the Lady Irish.

Check out more photos by clicking on the following link:

I would like everyone to know that we all owe Christian Lisle a huge debt of gratitude for these fantastic pictures week in and week out.

Congratulations to the mens and womens team for this past weekend’s performance. Both teams dominated the field on their way to capturing the titles. The men had all 5 runners finish in the top 15. They were lead by Alex Phillips who won the race in a time of 16:47. He was followed by Matt Sollenberger finished in 5th; Conner McIntyer in 6th: Patrick White in 9th and Sean O’Brien in 14th place. Also worth noting was the mens team had 19 runners go 20:00 flat or better!

The ladies had an even more impressive finish as they too won the title. The ladies almost swept the event! They were lead by first place winner Nina Zraik. She was followed in 2nd place by Isabella Ceepo; 3rd place by Elaina Mendiola; 5th place by Leah Lisle and 6th place with Mia Brady.

All of you should enjoy the moment! This race showed great determination and desire by all of you.

Now the journey gets a little more challenging. The Tiffin invite coming up will be a mini state meet. I am convinced all of you are ready for the challenge. Remember stay determined and focused. But mostly, stay POSITIVE! Enjoy this time with all your teammates.

Well despite the torching hot conditions the Fighting Irish were represented well at the Glen Oak Invitational.

Congratulations to the Lady Irish who won the Division II-III championship on a tie-breaker over Gilmour Academy. This was a huge statement considering we were not able to beat them at all last year. The Irish were led by Isabella Ceepo, Mia Brady, Elaina Mendiola, Leah Lisle, Nina Zraik, Maddie Mellinger and Natalie Tobin

The guys team finished in 3rd place behind Tuslaw and Smithville. They were led by a strong 9th place overall finish by Alex Phillip. He was followed by Chris Flohr, Sean O’Brien, Conner McIntyre and Patrick White.

Thanks to Mr. Lisle, you can see photos of the race at the link above.

Congratulations to all the Irish runners today. We had 8 coed teams running the friendly 2 mile relay race at Malone College. It was Irish #7 consisting of Matt Sollenberger, Isabella Ceepo, Yale Dulaney, Lana Wallace and Colin Scahill taking first place by a mere .01 seconds over Irish team number 1 consisting of Desmond Rock, Natalie Tobin, Ryan Zilka, Maria Leeser and Conner Handley. The course was far more challenging than the Districts last year. But, all of you managed to run with intention and desire. Remember, stay positive and enjoy every moment with each other.

I just want to send final reminder to all cross country runners about the beginning of the 2016 campaign. It all begins this Monday at 7:00 pm at Firestone Metro Park – Tuscawara lot. Please remember to bring plenty of water. We are going to be in for some very hot temperatures and hydration is crucial. Also, if you have not gotten new runner shoes, please consider getting them as soon as possible. For those of you who cannot make the first session, please begin following the routine we have outlined. If you do not have this routine, go to the link on this site for that information.

We are about a week away from the beginning of a “New Era”. I would like all of the athletes to consider the following quote:

“Life is paradise for those that enjoy many things with a passion”. Buscaglia 1992.

I would like to suggest to all the xc runners to consider beginning the 2016 chapter of xc as one of those things to enjoy with a passion. Begin by opening your eyes, ears, heart and soul to everyone on the team. Include everyone – even their flaws and shortcomings. We are all one family. Let’s take this journey together and see where it takes us! The journey is going to make many twists and turns. It is how you approach these paths that is going to dictate your final destination. Look always for the joy and satisfaction that will occur every day if you allow it. 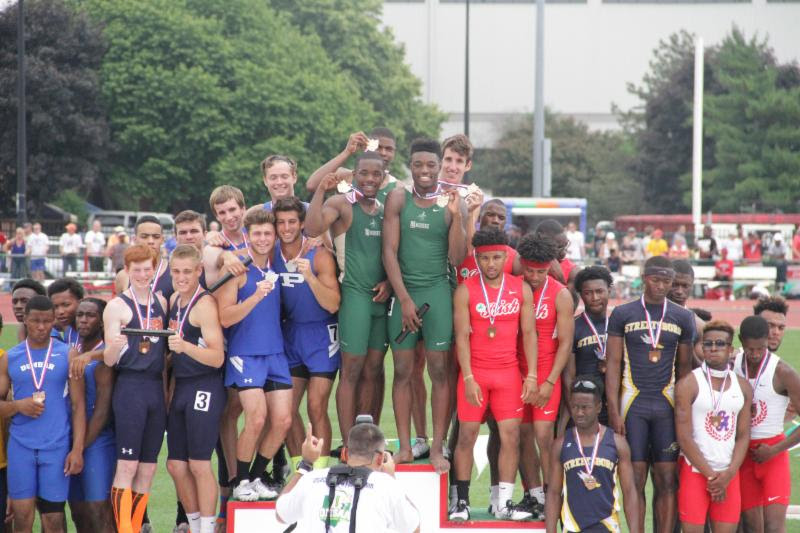 STVM brought home another State Banner in the Division II Boys 4×200 Relay. Above pictured are the members of that relay: Leonard Younger, Gonzalo Diago, Malik Wooldridge and DeAmonte’ King.

STVM track and field athletes went down to Columbus on June in 2nd qualifying in 6 events. The placed on the podium in 5 of those- Goal Accomplished! Congratulations to our athletes and Head Coach, Dan Lancianese on yet another successful season.

Below is a listing of the events we qualified for and where we placed:

Summer breakfast runs start June 25th. The athletes will run for approximately 60 minutes (in a park to be determined … see schedule) and will feast afterward. All are welcome!