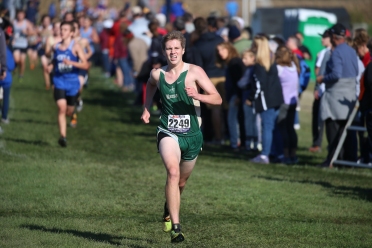 The Midwest Meet of Champions race was by far the strangest invitational we have been in this year starting with the soft ground conditions to a gator directing the guys race the wrong way! However, despite these bizarre situations, the competition was as extremely intense as anticipated. Unfortunately,  many of our Irish didn’t rise to the challenge.

The good news of the day was the depth shown by our younger runners. Due to their efforts, we now are going into our final regular season invite with a challenge for both teams as to who will be our top 7 for the post season. The final chapters will now begin to be written.

Here are the photos from this past weekend thanks to Christian Lisle: 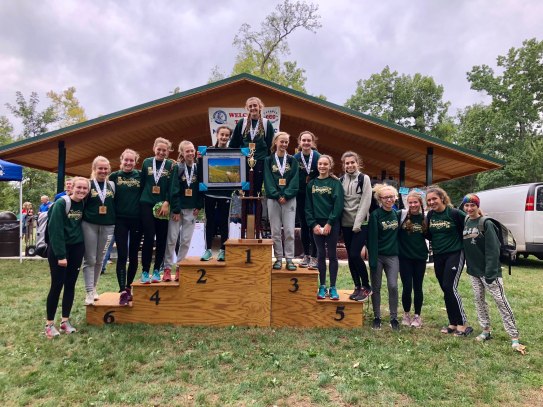 The Lady Irish not only dominated the Silver division, they also won the overall race beating out some of the top division 1 schools from Kentucky, Michigan and Ohio. This has only been done one time before at the All Catholic and that was done by our Lady Irish in 2010. The All Catholic has been contested for 24 years.

The men’s team also won the Silver division in convincing fashion by placing all 7 runners in the top 20.

The Lady Irish have won their 2nd straight Invitational this past weekend at the Youngstown Boardman Invitational.  The Fighting Irish took the title over 50 other teams. The Irish were led by Sophomore Theresa Hagey who finished 2nd overall in a field of 425 runners. She was followed by Amelia Moll, Nina Zraik, Sadie Porchowsky, Natalie Tobin and Quincy Powers. The Lady Irish are currently ranked 2nd in the state.

On the men’s side, Alex Phillip led the way with an impressive 4th place finish amount 435 runners. The guys team ended up in 2nd place against 53 teams. Matt Sollenberger and Colin Scahill both had strong finish that enabled the Irish to secure the runner up spot. Jake Pentasuglio and Nick Steel rounded out the scoring for the Irish. The guys team is currently ranked 4th in the state.
The following link are photos courtesy of our famous photographer – Christian Lisle
https://1drv.ms/f/s!AlMMInR3s6uQiIVmDEMmv1Uh6wd65Q

Chapter 2 – GlenOak Invite: Both the guys and girls teams dominated the Division II/III race winning in convincing fashion. Senior Alex Phillips lead the charge for the Irish men as he won the race in division II. Nina Zraik led the way for the ladies. Both team victories was decided by the closeness of the top 6 finishers. Both teams showed tremendous pack running and all showed a great fight at the end of the race.

Chapter 3 – Avon Lake: Sophomore Theresa Hagey won the overall title by a convincing margin of 33 seconds as she helped lead the Irish to a 6 point title over Shaker Heights. Theresa was followed by Amelia Moll, Nina Zraik, Sadie Porchowsky and Natalie Tobin. The ladies team won the title against all division I schools. This is now the ladies second straight title.

The guys team were without 2 key runners and yet they still ended up in a respectable 3rd place finish only losing the runner up title by 4 points. The guys team also ran up in division I. Matt Sollenberger was the first finisher for the Irish. he was followed by Colin Scahill, Andrew McSteen, Chase Powers and Nick Steel.

Now the mountains become even more intense – stay tuned for more of the 2018 story!

Thanks to Christian Lisle here are the links for both the Glen Oak and the Avon Lake invites:

Congratulations to Sophomore Theresa Hagey who broke a 6 year old school record in the 5000 meter run this past weekend at the Tiffin Carnival.
Despite the terrible conditions, Theresa led the way for the Fighting Irish as they finished in a close 2nd place to the defending champions from Lexington. Theresa ended up 2nd overall as well. She was followed by Nina Zraik, Amelia Moll, Sadie Porchowsky Natalie Tobin, Quincy Powers and Emily Bame.
The guys team also faired very well with an impressive 3rd place showing out of 44 teams. The guys were led by Alex Phillip. He was followed by Matt Sollenberger, Colin Scahill, Chase Powers and Nick Steel.
A special shout out goes to the guys open race where all of the Irish finished with times under 19 minutes to help the Irish to a 3rd place finish against 47 teams.